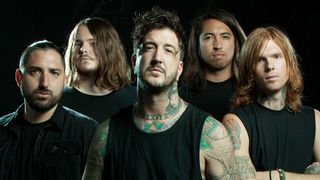 It’s been a turbulent couple of years for Of Mice & Men. The Orange County band’s fourth album, Cold World, was recorded while singer Austin Carlile was recovering from major surgery due to complications associated with the genetic condition Marfan Syndrome. At the same time, he came off the pain medication he’d been taking for a decade, which left him shaking and vomiting at night in the two-bedroom apartment the band were sharing in New Jersey.

Through all this, he drew strength from his belief in God, and was baptised after they finished recording. The resulting album reflects on the difficulties of personal pain, and explores the wider suffering of humanity. Austin guides us through the album, song by song…

Austin: “Game Of War is where we got the title for the album. The first lyrics are ‘Cold world, isolating’. Aaron [Pauley, bass/vocals] actually came up with the song. He wrote it the day of the San Bernardino shooting [a terrorist attack at a Christmas party in California, in December 2015]. A lot of our music comes from an actual experience or feeling. San Bernardino is so close to us, and so it really hit home, and the song encapsulates the album and sets up the mood that we wanted. It’s dark, it has very tribal drums, and it reminds me of A Perfect Circle or older Tool, and I love those bands.”

Austin: “It was originally an idea that Alan [Ashby, guitar] came up with and I had been working on for a while. The song is putting a spotlight on the one per cent – the one per cent of the one per cent. The powers that be, the people that have control over money and imports and products and food. They have a responsibility to people, and they abuse that responsibility. Everything that we’re doing to the Earth has repercussions. The line, ‘Force-feeding chemicals into the mouths of all our youth’ is talking about pharmaceutical companies. So many people are dependent on drugs, and it’s not fair, because a lot of people don’t know better. But the people that are doing it do know better.”

Austin: “This was a track that Aaron and I worked on together. It’s an empowering song of, ‘I’m not going to let you change me, I’m not going to let you take away who I am, what makes me real’. When we wrote the song, we thought of the video treatment, and having a bunch of people holding signs about what makes you feel real. People always aren’t the best to each other, and it was really important to let our listeners know that it’s a struggle that even we go through.”

Austin: “It was originally called 5⁄4 in the studio, because it’s in 5⁄4 tempo. It was one of the first songs that we recorded in our jam room in Orange County. It’s about the struggle of someone who’s lost and broken, and then Aaron comes in with the chorus – ‘Hold and don’t let go, when you feel left in the cold’. He’s talking about love, and once you experience a love like that, it’s going to haunt you. And you’re going to want that back. He wrote it metaphorically, and I took it as the holy ghost, as in the holy spirit.”

Austin: “Contagious was written by Valentino [Arteaga], our drummer. We wanted an upbeat live song, and I worked with the verses a little bit. It was a lot more hip-hoppy at the beginning, and we really toned it back. When I heard the song, I was like, ‘What would 18 or 20-year-old me want to hear over this?’, and that’s kinda what I came up with. The chorus reminds me of a throwback chorus of some of my favourite bands, and it means a lot to me. It was a chance for me to get out some inner demons with dealing with certain people in my life, and you know it’s not always roses and sunshine when you’re in a group, and there’s a lot of struggle that happens, and that was my cathartic way to release that.”

Valentino: “We are all about listening to albums front to back, and to keep the mood right we felt like we wanted a ‘palette cleanser’ before Pain. This is an instrumental I made with my Teenage Engineering Pocket Operator Rhythm, that morphed into a pretty moody track. Our producer [David Bendeth] was against it at first, but we have never made an album with an instrumental track like this, and with each album we want to step into unknown territory, so we were adamant about keeping it. Not everyone listens to albums from start to finish, but for the listener that does, this track will make sense as part of their sonic journey through Cold World.”

Austin: “Pain came from my entire experience with Marfan Syndrome [a genetic disorder that affects the connective tissue of the body]. I wake up every day in pain. All my joints get swollen, and sometimes I can’t feel my legs or different parts of my body, and sometimes I can’t function in the morning unless I take a hot shower and do all my exercises. It’s a constant struggle for me. With the band, through St. Jude [Children’s Research Hospital] or The Marfan Foundation or Living The Dream Foundation, we’ve met a lot of people that are in a lot of severe physical pain, and I wanted to write a song for myself and for them to embody what that feels like.”

Austin: “Aaron had the chorus for a while, and I really wanted to play with the verses. I kind of wrote it as the end of the world – we kill, we war, we murder, we hurt, scorch the skies and poison the air just to watch the stumbling efforts to partially fix it. You have made your bed, now lie in it, and realise you can’t eat your money. The verse about Jesus goes along with Like A Ghost. I don’t agree with categories of religion, I agree with what Jesus said. The only thing Jesus ever talked about was loving your neighbour. And he came to do that, and show us that ultimate love.”

Austin: “Relentless is another Tino song. We wanted a more upbeat song, and it’s something we’ve touched on before – you can’t take all this stuff from me, I’m relentless, I’m gonna keep coming. Life’s gonna knock me down, but I’m gonna get back up. It’s a positive mindset song. You can do this, you’re allowed to be confident in yourself, and think highly of yourself. You’re supposed to, as a human being – you’re supposed to love yourself. It’s a song that’s showing ‘I’m relentless’, and that’s really important for us, especially with what we do and how the band’s been. It reminded us too of a fight song – something that should go on the NFL, or UFC, or WWE.”

Austin: “Down The Road is talking about either losing a loved one, or separating from a loved one, or being drawn apart from someone. It’s kind of, ‘No matter what, I’m gonna see you down the road, I’ll see you again, whether that be this life of the next, or whatever you may believe.’ You’re missing someone, you’re longing for someone. This is a song that Aaron really headed up, and wrote the lyrics for. And so it was really cool for him to explain this song, and for me to relate to it. I’ve lost both my grandparents, and I lost my mother when I was 17, so it really spoke to me.”

Aaron: “The track + came as an expansion to the string arrangement I wrote for Away, and ended up becoming a prelude to it. Sonically and emotionally, it’s the antithesis to -, which then rounds out and balances the ending of the album.”

Austin: “The verses are talking about how you put yourself in a lot of situations in life because of yourself. We do these things, and we dig these holes, and we get in them to hide away. But eventually it rains. Water fills them up, and you either drown in the hole you created for yourself and you’re completely miserable and you die, or you rise to the top and crawl out of the hole. A lot of the times, with the situations that we go through, we make them so much worse by overthinking, and by underthinking. The song talks about how it’s not necessary.”

Austin: “This is one of my favourite tracks on the record. The chorus is: ‘I’m finally okay, I’m finally okay with who I am today.’ We chose the word ‘okay’ for a really specific reason. Through life, when you’re going through things, and accomplishing things, and overcoming things, people ask you, ‘How are you?’ After this whole story of the record, it’s, ‘I’m not good, I’m not bad, I’m just okay, I’m here.’ And that’s how I feel a lot of days. When you wake up, the mindset that you put in your head says a lot about how your day’s going to transpire. This song is reminding you that it’s okay just to be okay. It’s a day, you’re alive, and it’s a blessing.”

Of Mice & Men’s new album, Cold World, is out on September 9 via Rise Records.

The Nu Metal Quiz: how well do you know metal's most divisive sub-genre?