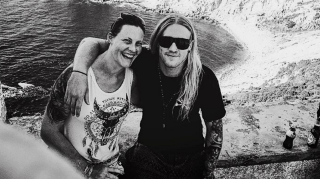 The singer revealed the news to TeamRock at an event in Helsinki, Finland, to promote Nightwish’s upcoming live release Vehicle Of Spirit.

Nightwish plan to take at least a year off after wrapping up touring commitments for latest album Endless Forms Most Beautiful.

Jansen didn’t give an official statement on her pregnancy, but mainman Tuomas Holopainen told TeamRock: “The issue of Floor having a kid came up earlier this year. I asked her if she had been thinking about having a child and she said, ‘Yeah, actually, I have.’

“So I said, ‘Well, we’re thinking of having a break so if you want to…’ And here we are.

“It’s just a wonderful, beautiful thing because now she gets to be with him or her for a year before we continue so it’s perfect timing.”

Jansen, whose partner is Sabaton drummer Hannes Van Dahl, has worked with Nightwish since 2012 and was announced as the band’s full-time singer in 2013. She replaced Anette Olzon on what was initially seen as a temporary basis before being given the role permanently.

Mainman Tuomas Holopainen was thrilled with Jansen’s contribution, but said she was capable of even more and that she didn’t get to show off her operatic style because that vocal range didn’t suit the songs.

Nightwish have four dates in Asia lined up for next month.

Why Nightwish Are Now The Best Band They've Ever Been