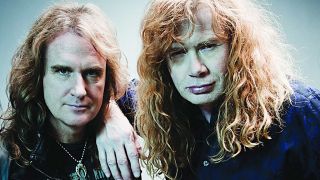 Megadeth mainman Dave Mustaine has hinted that the band’s new lineup has been agreed following the surprise departure of Chris Broderick and Shawn Drover.

The guitarist and drummer announced their resignation within hours of each other last month, leaving Mustaine and David Ellefson as the only current members.

Earlier this month bassist Ellefson said the thrash giants would remain off the road for most of 2015, but that work on their 15th album will go ahead as planned next month.

Now Mustaine says in a tweet: “I wish Megadeth fans could know what is going on right now… you would be very happy!”

While no details have been confirmed, the bandleader’s son Justis last week posted a phone video of Ellefson playing alongside an unidentified drummer in their studio.

After the latest departures, guitarist Glen Drover said he wouldn’t be returning to Megadeth, while fellow ex-member Jeff Young went further, insisting the band was “done.”