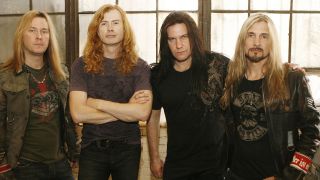 Glen Drover has ruled out a return to Megadeth after his replacement Chris Broderick quit earlier this week.

Guitarist Broderick announced his departure hours after Glen’s brother, drummer Shawn, did the same – leaving Dave Mustaine and David Ellefson the only current members of the thrash band.

Glen left in 2007, but he’s been asked online by fans whether it’s time to go back. He says via Facebook: “I’m very sorry, but that will never happen. There is no chance I would ever do that. Thanks a ton for all your awesome support; it was fun while I was there, playing all those cool shows and meeting a lot of you.”

He adds that he’s focusing on “other cool things coming up.”

Meanwhile, the supergroup made up of ex-Megadeth members Chris Poland, James LoMenzo and Nick Menza are planning to reveal their first music next month. The unnamed band say they have six “heavy, original” songs prepared.