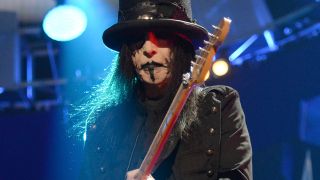 Mick Mars says he was “clearly joking” when he said in 2014 that he’d “invite the world to come for free” should Motley Crue ever tour again.

He made the comment five years ago on That Metal Show shortly after Motley Crue signed a legal document to stop them from touring again, with the video interview resurfacing last week after the Crue announced their intentions to play live again.

And while Mars acknowledges the comment was intended as a joke, he admits he was wrong to say it at the time.

The guitarist says in an Instagram message: “While I was clearly joking about the free tickets that night on That Metal Show, I was also deeply convinced that we would never, ever be touring again. I would have never expected to be facing a whole new generation of fans demanding to see us play.

“In fact, touring with Motley Crue comes at a weird place in time, since my solo record is almost complete after such a long time of writing and recording. But, I put our fans first.”

He adds: “Anyways, I am eating a lot of crow and humble pie this Thanksgiving for those remarks and accept that some of you see this as me being dishonest. I said what I said and I was wrong. Peace.”

Last week Motley Crue ended weeks of speculation that they could get back together again for live shows by launching a video showing the destruction of their cessation of touring contract.

No live dates have been announced yet – but there have been rumours that the Crue could tour across North America next summer with Def Leppard and Poison.