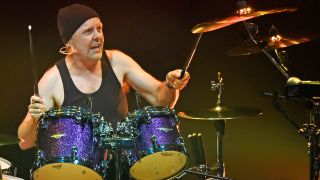 He’s taken part in a light-hearted “stupid questions” interview with EW.com as the band continue to promote the release of 10th album Hardwired… To Self-Destruct, which was released last week and has topped charts all over the world.

Asked what goes through his mind while playing a solo, Ulrich says: “I should have taken lessons. I hope the sound man has turned this up so loud that the volume is masking my inability. Every late, great drummer is turning over in his grave.”

He adds: “Since I write the setlist, reminder – don’t put One on tomorrow’s setlist.”

The art-collecting drummer is then asked how to create the best-ever drumkit. He replies: “The first kit that plays itself. Not to be confused with a drum machine, an actual real acoustic set that plays itself, and the drummer can be at home, resting his tired and aching body on his laurels.”

Metallica won a Grammy for 2003 album St Anger, and they’re the only American band to have five consecutive studio albums reach the top spot on the Billboard charts. Asked if he’d consider returning the Grammy in order to secure the number-one position for Hardwired… To Self-Destruct, Ulrich replies: “Did we win a Grammy for St Anger? Winning a Grammy for St Anger just sounds wrong.

“Since we have more Grammys than number-one albums, for the sense of balancing those out, yes – I’d give the St Anger Grammy back, to get those numbers closer together.”

Recalling that US troops used Metallica music as psychological weaponry in Afghanistan, the drummer says: “The war would have been over faster if they’d stuck to only St Anger songs.”

His drum sound on that album was heavily criticised, and he says his favourite put-down is: “I forgot to take the snare out of the cardboard box that it came in.”

On the topic of things he’s always wondered about himself, Ulrich lists: “What’s with the accent? What’s with the big forehead? Do I really look like an olive on a toothpick like Kirk Hammett says? Why am I so stubborn? What am I so contrary? Why the extra chin?”

Metallica continue to add dates to their WorldWired tour, which is expected to run for at least two years. The latest addition is a second appearance in Mexico on March 3. They’re the cover stars of the latest edition of Metal Hammer, on sale now in print and via TeamRock+.