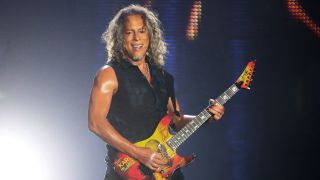 Kirk Hammett has described his experience of creating the solos for latest Metallica album Hardwired… To Self-Destruct as “incredibly easy.”

And despite taking a back seat role in songwriting after losing hundreds of riffs when he mislaid his phone, he’s still pleased to have made an artistic contribution to the record.

The follow-up to 2008’s Death Magnetic was released earlier this month.

Hammett tells Metallica club magazine So What!: “It’s a heavy album with a lot of groove on it and I live for groove. I love to hear a nice groovy, swinging, bouncy beat – because for me, that’s usually the most fun sort of thing to solo over.

“That helped me when I was doing my guitar solos. The feel of the songs really, really came through, more so than they have in the past.

“The feels were so evident and obvious and just there for the grabbing that I had a great time soloing over the stuff.”

He continues: “In the past, when I would work on guitar solos and then show up at the studio and put what I worked out on the album, I’d have a pretty good idea of the worth of that solo.

“This time, all the playing is really just for the song. So it’s hard for me to really establish what worth any particular solo has in it, because I just came in and threw them down.

“And so because of that, it all seemed amazingly easy, and almost like I didn’t work for it.”

But the guitarist adds: “In my head when I think about it, I think, ‘Oh, well, I’ve been working up to this point all my life.’ In the past I’ve driven myself crazy – this time it wasn’t like that.

“I just showed up with all the ability that I could muster for that given day, and just went for it.”