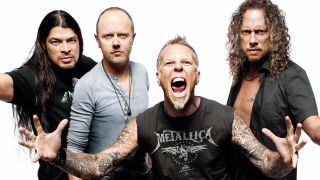 James Hetfield has reported that Metallica didn’t keep any unused riffs after completing work on latest album Hardwired… To Self-Destruct.

That’s despite having notched up several hundred ideas that they felt were at least worthy of consideration.

Drummer Lars Ulrich has said that, prior to writing sessions for the follow-up to 2008’s Death Magnetic, he went through a total of 1600 ideas to identify the strongest ones.

Now Hetfield tells La Viola: “Once an album is finished the box of riffs is thrown away. We use the best.

“There’s no reason to save it if it’s not good – we’ll write new stuff. I’m very interested in moving forward.”

He adds: “It was difficult, having 800 riffs on my phone or my computer, and all I wanted to do was, ‘Let’s write a new one now. Let’s just do it.’

“There’s something magical that happens when Lars and I get together and I plug into a loud, crunchy guitar sound. It moves me and I can create riffs.”

Hetfield recently admitted to Metal Hammer that he and Ulrich had fallen out over the drummer’s approach to writing, saying: “We were in the studio and it was like, ‘Hey, I’m the guitar player – I like this part. I wanna play it.’

But now the frontman reports of their relationship: “It takes a lot of work, and you have to be honest with each other. You have to communicate, or else.

The James Hetfield Quiz: how much do you know about Metallica’s frontman?