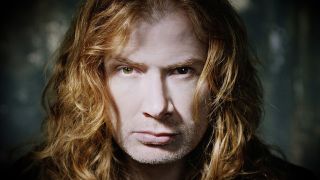 And he’s described the period of time in which nu-metal was on the rise as “the worst part of my career.”

The developing project comes nine months after the band released 15th album Dystopia, and it’ll be the first to include contributions from the latest full-time lineup that includes bassist David Ellefson, guitarist Kiko Loureiro and drummer Dirk Verbeuren.

Mustaine tells Cry Of The Wolf: “We’re actually working feverishly with the hard drives to catalogue all the song ideas we have, to start working on separating them into new parts and so forth and so forth.

“I can’t give you more details – but as soon as I can, I will start to record with these guys.”

Meanwhile, Megadeth have just commenced a North American tour, with the Butcher Babies replacing Havok as one of the support acts following a disagreement.

Mustaine says: “Contrary to all the mudslingers out there, people that tour with us know they are going to have a great time.

“The list is as long as my arm of people that have toured with us and have gone on to bigger success – Stone Temple Pilots, Pantera, Korn, White Zombie, Alice In Chains. Our audience is a real friendly and open-minded when it comes to new bands.

He says he chooses bands based on what he’d like to hear himself, adding: “I have to listen to them night after night – I want to be able to enjoy myself just as much as you do.”

And he’s glad to have reorganised his career so that the choice of supports are his own: “During that period when no one was doing guitar solos, we had bands go out with us and I despised them. The reason they went out with us was because the label said ‘you need to do this.’

“That was the worst part of my career during that whole nu-metal thing. You know there were no solos because the guitar players weren’t good enough to do solos.”