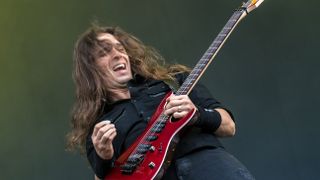 Megadeth guitarist Kiko Loureiro says his partnership with Dave Mustaine has thrived because he’s not afraid to speak his mind.

Frontman Mustaine previously said he was thrilled to “have a partner again” after Angra guitarist Loureiro was officially added to the lineup.

And the Brazilian axeman says that while he always makes suggestions in a respectful manner, giving Mustaine his place as the band leader, he won’t simply turn up and take a pay cheque.

In an episode of One On One With Mitch Lafon, due to be released later this week, Loureiro says: “It’s great because it’s not easy to please Dave! And it’s true, we have a great relationship. I just kind of understand him and how difficult it is to run a band.

“It’s not my nature to just show up and play, not at all. My nature is to be this band guy who sees things that can be better or different. And every time I feel more comfortable to say what I think.

“But I know I can say stuff and that’s why I think Dave gave me that compliment, saying he has a partner.

“I come to Dave and say, ‘Let’s play this part together, we can make it sound better.’ That’s a partnership because I’m not thinking only about how I sound, but how we sound – how the two guitar players are doing.”

Loureiro adds that he had been thinking about leaving Angra even before his dream job in Megadeth came up.

He says: “The decision, I started to do it before Megadeth. The band has had a lot of ups and downs. Like 2008, 2009 we were not so optimistic. We were not so excited about the band.

“I got married to a Finnish girl so I was coming to Europe a lot. I wanted to change something in my life. I moved to California for my career. So I started to abandon the band in a way.

“Then came the first email from Megadeth asking me if I could talk to Dave. The first thing I did was call the guys from Angra. I asked my wife and myself, but I knew it was super cool. I’m a big fan of the band.

“But then I called the guys from the band and all of them were every excited. They all said, ‘You have to do it, I would do the same.’”

Angra will celebrate the 20th anniversary of their seminal album Holy Land in Brazil this summer, but Loureiro won’t be there to take part.

Instead he will be on the road with Megadeth, who last week confirmed former Soilwork man Dirk Verbeuren as their permanent drummer.

Verbeuren replaces Chris Adler, who has returned to Lamb Of God.

Loureiro says Adler’s departure was in the best interests of everyone and that Adler was originally only onboard to record latest album Dystopia, but that the group had so much fun in each other’s company that he stuck around for as many tour dates as he possibly could.

He says: “It was always, ‘You’re the guitarist, welcome aboard.’ Chris Adler was always the Lamb Of God drummer and there just to record the album. But then everybody liked him and it was great, and he was a fan of the band so it was a great feeling.

“But he was always the Lamb Of God guy. It was very tough for Chris because sometimes he was flying from a Lamb Of God show right to Megadeth. It was a lot for him. Not even Megadeth fans would want to see Chris quitting Lamb Of God.

“Chris suggested Dirk and then it was great. Chris, Dave and David came to this nice agreement that Dirk can be with us full-time and it’s better for everybody.”

The success of Dystopia has led Megadeth to announce further tour dates and Loureiro says thoughts of a new album are a long way off, although he knows the time will come soon.

“We know that soon, something has to happen,” he says. “Having Dirk now officially announced is great, because it’s one less thing to be worried about.”

The full interview with Loureiro for One On One With Mitch Lafon is now available on YouTube, iTunes, Podbay and Spreaker from July 21 (Thursday).