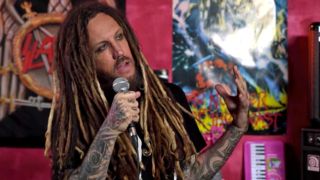 Korn guitarist Brian ‘Head’ Welch has recalled the incredible lengths he went to to ensure he always had access to drugs during his darkest days.

Welch previously revealed how he sent three 8-balls of meth from the US to Germany via Fed-Ex in 2004, risking everything to make sure he could get high while on tour.

And now the guitarist, who has been clean for many years, confirms that he would also hide methamphetamine inside sticks of deodorant to avoid detection by sniffer dogs at airports.

In the latest edition of Loudwire’s Wikipedia: Fact or Fiction?, Welch says: “It’s cool that I can laugh about it now. Meth will make you do some crazy things. I would scoop out the white deodorant part and put meth in a baggy.

“I was thinking the dogs will smell the deodorant. They won’t smell the meth in the baggy. And it worked.”

Welch also goes on to discuss how spirituality and his relationship with God helped him overcome his addictions.

He left the band in 2005 before returning in 2013 ahead of the release of Korn’s album The Paradigm Shift.

Korn’s 12th album The Serenity Of Suffering is set for release on October 21 via Roadrunner Records. The band have a number of tour dates still to come in 2016, including a joint UK winter tour with Limp Bizkit.