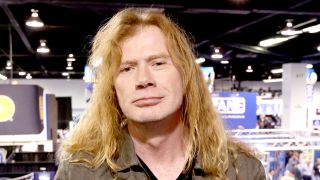 Megadeth mainman Dave Mustaine has slammed Havok after they claimed an “unacceptable management contract” had led to them being kicked off an upcoming North American tour.

They announced yesterday that they wouldn’t be on the road with Megadeth, Suicidal Tendencies, Amon Amarth and Metal Church as previously announced, after falling out with Mustaine’s son Justis, who’d been looking after their affairs.

Havok said: “The reasons for our absence are directly related to a contract negotiation insisted upon by Mustaine Management. We were offered an unacceptable management contract, which we declined.”

In reply to online comments, Dave Mustaine confirmed last night that it had been his decision to drop Havok. He tweeted: “They didn’t pay Justis what he’s owed, or sign the standard contract. I took care of ‘em. Sad.”

He added: “They had an industry standard contract, the same I have. Five months later, still wouldn’t sign it, until they’re dropped. What is there to debate? I gave them more cash, time, merch items, space, lights and sound than their contract said every night. Stupid me!”

Justis Mustaine said in a statement: “I worked with Havok for one year. Despite getting Havok paid, marketed and exposed in that time – bringing them a new merch deal, booking agent, and overseeing what has clearly been their biggest year yet – I was compensated poorly for my work.

“I finally put a contract in front of them, which would secure me 15% of income, the industry standard. They refused to agree, so I dropped them.”

He adds: “I wish Havok all the best in their efforts to be a professional band, but as evidenced by today’s gossip-mongering, they’ve still got a long way to go. Great music, great band!”

Megadeth are currently touring South America, in support of latest album Dystopia. The North American tour that was set to include Havok commences on September 20. See the dates below.

Megadeth visit fan in hospital after he was stabbed at show