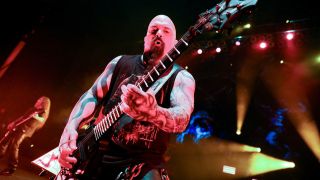 Slayer guitarist Kerry King has joked that the Big 4 of thrash don’t feel like rivals any more – except for Megadeth leader Dave Mustaine.

And he’s admitted his band won’t go on for ever, although he’s not ready to stop just yet.

Slayer, Megadeth, Metallica and Anthrax became known as the Big 4 during their rise to fame in the 1980s. They didn’t perform together until 2010.

Asked whether he ever felt current tourmates Anthrax were ever viewed as rivals, King tells the Miami New Times: “Yeah, for sure, when the Big 4 came out. When we did Clash Of The Titans tour around 1990, you couldn’t really be at war after that point.

“We thought we were better than everybody. I would imagine Anthrax probably did too. Dave Mustaine thinks that to this day!”

King recently said the future of Slayer was in doubt because frontman Tom Araya was considering retirement. Now he comments: “I don’t have an endgame in mind. That being said, I don’t want to die on stage either.

“The good news is we’ve got seven to eight songs from the last recording. They’re done, with the Repentless sound. It’s just finding time to get in the studio again.

“I don’t see that happening until at least late next year or early the following year. It’s a wonderful place to be – we’ve never been this far ahead.”

In the meantime, Slayer continue touring North America with Anthrax and Death Angel. King says: “Back when we started, ‘old’ had a different meaning to me. Old was 55. I’m past that and I don’t feel old.

“Things hurt worse than when I was 25 – but the Slayer shows are still epic.”