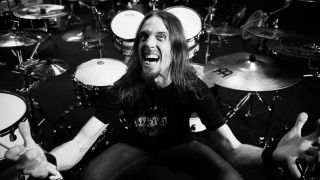 The sticksman was recently confirmed as a full-time member of the band after touring with them in place of Chris Adler – with the Lamb Of God man instrumental in getting Verbeuren behind the kit with Dave Mustaine and co.

Speaking of his arrival in the Megadeth camp, Verbeuren tells Metal Messiah Radio: “It was very smooth. The guys are really cool, awesome, nice people – very welcoming. After one day, I sat down with Dave Mustaine and he was very open about everything.

“It’s been a month now that I’ve been on the road with them, and it’s been nothing but great. I think it’s all about how you deal with a situation like that.

“I’ve been in bands for 25 years, so I kind of know how it works, and I know what my place is, so I try to do what people expect of me, and if they ask me for my opinion, I’ll give it. And they do. Dave is always asking, ‘What do you think of this song? Should we play this one?’ So it makes me feel at home.”

Verbeuren says he’s been a fan of the band for a long time, and points in particular to 1986’s Peace Sells… But Who’s Buying and 1990’s Rust In Peace, which featured late drummer Nick Menza. And he says he feels “strong emotions” when playing tracks first laid down by Menza.

Verbeuren continues: “Nick had a very particular swing to his playing, and I actually really feel that when I’m playing the songs. It was a strange day when he died, because that was my second show in Megadeth. He died 10 minutes from my house at this little club in Los Angeles that I’ve visited too.

“That was, of course, a big shock to everybody, especially for Dave and bassist David Ellefson. It was rough. But at the same time, it was nice that night to be able to honour Nick.

“There were some strong emotions, and ever since, it hasn’t gone away, because I think about it a lot when I’m playing those songs. He was way too young to pass away.”

Megadeth will head out on tour across North America next month with Amon Amarth, Suicidal Tendencies, Metal Church and Havok in support of their 15th album Dystopia.