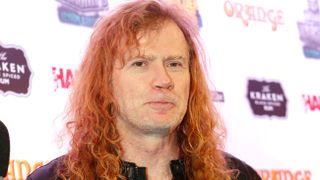 The band currently have Soilwork’s Dirk Verbeuren out on the road with them as Chris Adler has returned to work with Lamb Of God. Adler was recruited by Mustaine to work on Megadeth’s latest album Dystopia and has toured with the band until recently.

But with Adler committed to Lamb Of God and not set to return to Megadeth until June 28, Mustaine says he has to decide how he wants to handle the situation going forward.

He tells Kerrang: “We’re still trying to figure out what we’re gonna do with our drum position. It’s great having Dirk here.

“He’s been really wonderful to play with also. So there’s not a shortage of great players out there, and we’re gonna make our decision real soon.”

He tells Kaaos TV: “Obviously it’s a great opportunity and it was a little bit surreal when Dave Mustaine is calling Dirk on the phone. But Dirk is a fantastic drummer, so I’m not shocked by any means.”

Soilwork have had to bring in The Arcane Order’s Bastian Thusgaard to fill in for Verbeuren.