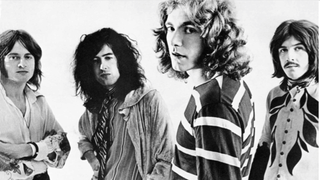 Led Zeppelin have announced they will reissue a remastered version of their 1997 BBC Sessions album.

The Complete BBC Sessions has been remastered by Jimmy Page and John Davis, who helped engineer the previous Led Zeppelin remasters series.

It will be released on September 16 on CD, vinyl and digital formats, with a super deluxe box set also on offer.

A bonus disc packaged with the remastered release includes eight previously unreleased tracks, made up of a ‘lost session’ that the BBC wiped from the archive – described as a ‘holy grail’ for Led Zep collectors.

A fan taped it from an AM radio in Europe when it was broadcast and guitarist Page has worked to restore it. It was recorded on March 19, 1969, at Maida Vale Studio 4 in London for Alexis Korner’s Rhythm and Blues programme on the BBC World Service.

It includes the only recording of Sunshine Woman, a lost Led Zeppelin song.

Recalling the original recordings, vocalist Robert Plant previously said: “The whole thing was very quaint: the politeness of the audience, the technicians fumbling about, proper hallowed low-key introductions. Like there was some sort of holy moment about to occur.”

The deluxe box set includes 3CDs, 5LPs, a download code for the digital version, a 48-page book with photos, BBC memorabilia and session information. a high-quality print of the original; album cover is also includes, while the first 20,000 set swill be individually numbered.

Led Zeppelin were recently cleared of any wrongdoing in their Stairway To Heaven plagiarism trial.

Disc One 1.You Shook Me