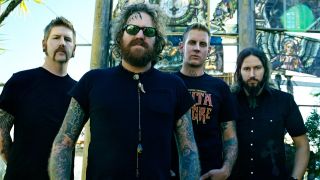 Mastodon vocalist and guitarist Brent Hinds says he is working on a “cool new Mastodon song” in the studio as the band prepares its 7th album.

The group’s next project follows 2014’s Once More ‘Round The Sun, which earned a Grammy nomination in the Best Metal Performance category for the track High Road and will compete alongside tunes by Anthrax, Motorhead, Slipknot and Tenacious D at the February 8 event in Los Angeles.

Hinds posted an Instagram photo from the studio, saying: “Got to work on a really cool new Mastodon song today! First time playing my new 13 string pedal steel I got from @robertrandolf.”

Mastodon played Sonisphere at Knebworth in July – the 2015 edition has just been cancelled by organisers due to lack of a sellable lineup – and performed an extensive UK tour in November that included a show at the Brixton Academy.