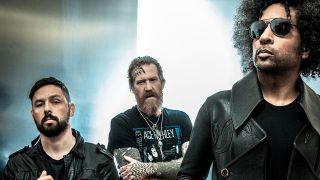 Mastodon guitarist Brent Hinds has been forced to bow out of supergroup Giraffe Tonge Orchestra’s upcoming shows after breaking his leg in a motorbike accident.

He’s posted a picture of his strapped-up limb on Instagram, explaining: “Broke my fucking leg starting my motorcycle, goddamnit.

“Sorry to all the shows I was about to play with GTO and West End Moteal and Fiend Without A Face.

“Life’s a bitch then you die. Happy thanking!”

They launched debut album Broken Lines earlier this year. Their first US tour is set to commence on November 29 in Boston, MA and end on December 10 in Detroit, MI.

Troy Sanders of Mastodon revealed this week that the band’s seventh album is complete, saying: “We’re just putting a timeline together of when and where. So 2017’s going to be an incredibly busy and fruitful year in the world of Mastodon.”

Hinds said in June of his main band’s upcoming release: “It’s shaping up to be a double album. One is an album I wrote myself and recorded with Brann and Troy during the Once More ‘Round The Sun sessions.

“The other guys are writing another album, which I haven’t even heard yet, so I can’t tell you what it sounds like.”