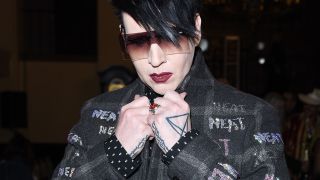 It’s been confirmed that Marilyn Manson will star alongside Sharon Stone in TV series The New Pope.

The project is being helmed by Paolo Sorrentino who also directed The Young Pope and it will be broadcast on HBO. A release date has yet to be revealed.

Variety report that both the vocalist and Stone are fans of the previous series, although there’s no word yet what roles they will play.

John Malkovich and Jude Law were previously announced for the project and they will play two popes in the series which is described as similar to Fargo and True Detective.

Revealing a picture of his character on-set, Manson tweeted: "The New Pope is gonna be fantastic. When in Rome.”

Manson has had many acting roles throughout the years, including Sons Of Anarchy, Salem, Californication and David Lynch’s Lost Highway.

The vocalist is preparing to head out on the road with Rob Zombie this summer on the The Twins Of Evil: Hell Never Dies Tour, while Manson revealed in March that he was wrapping up work on his new studio album.

The New Pope is gonna be fantastic. When in Rome pic.twitter.com/tvuoCJjqbiMay 17, 2019