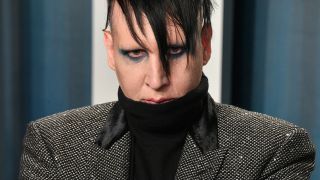 Marilyn Manson is telling fans to “prepare”, suggesting that he’s about to make an announcement.

Manson has uploaded a new picture across his social media accounts with a caption that reads: “Never-ending Astral Vampire. Prepare…”

Could this be a nod to his new solo album?

Work on the follow-up to 2017’s Heaven Upside Down was completed back in April this year, according to Manson’s collaborator Shooter Jennings .

The producer and musician posted the news on Instagram alongside a picture of him beside a Manson Rolling Stone cover, saying: “Photo by Marilyn Manson. Just waiting for this finished masterpiece to be released.”

That was followed in the comments section by Manson, who said: “Shooter, Misty and Pancake. Finished masterpiece album. And Matt Mahurin. Shit is gonna get real.”

While we wait for more information, Manson did previously say he was planning on calling the record Marilyn Manson.

Speaking with Revolver last year, Manson revealed: “It's still to be determined, but I think it's the album that should be called Marilyn Manson. I'm in a mode in life where I wanted to tell stories with this record, and it's sort of like a wax museum of my thoughts, a study of the chamber of horrors in my head.

“All the romance and hope you can have in the world, here in the End Times where it can be a different kind of apocalypse for each person listening to the record.

“I tried to paint it with words, and Shooter with sounds, so you can see and hear all of your longing, your passion and despair. That's sort of a dramatic explanation of it, but it is full of drama.

“I wouldn't compare it to any of my other records, but you hear a bit of everything — it's like I've focused everything into one spot, finally.”