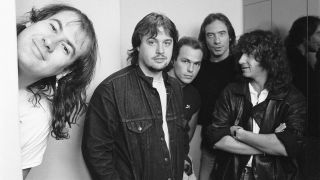 Marillion guitarist Steve Rothery has reflected on the band’s 1987 album Clutching At Straws and recalls the difficulty in making the record.

It was the band’s last with frontman Fish and Rothery was speaking about the tensions in the group at the time with eonMusic after Clutching At Straws scooped the Reissue Of The Year accolade at last month’s Progressive Music Awards.

Rothery says: "I think it’s probably my favourite album from the Fish years. I think we’ve created a great version of it, and the way the Ultimate Version turned out, all the hard work, and Avril Mackintosh’s remixes, I think are outstanding.

“You try and make it as good as you can make it really, because this will be how the album is remembered for a long time.”

As for the recording process, Rothery recalls: “It was a very difficult album. I left the band for 24 hours during the recording of it. There was a big argument between Fish and myself. I was out of the band as far as I was concerned.

“It kind of blew over, but it was a difficult album. It’s ancient history, but it was difference of opinion fuelled by maybe too much partying.”

The second single from the album Sugar Mice remains a much-loved track from the band’s Fish era – and Rothery says criticism of his playing spurred him on to record the song's searing guitar solo.

He explains: “Well, that was actually part of the argument! As I say it’s ancient history, but I didn’t like the engineer that producer Chris Kimsey had chosen to work with for the second stage of the album, and I sort of said as much.

“Then he criticised my guitar playing on the record and then I went out and played the Sugar Mice solo.”

Marillion have just released their new studio album With Friends From The Orchestra which sees them team up once again with string quartet In Praise Of Folly, who have previously toured with the group.

Marillion will head out on the road with them once again in November, while a deluxe edition of their 1995 album Afraid Of Sunlight will also be released on November 1 on 4CD/Blu-ray and as a 5LP box set.