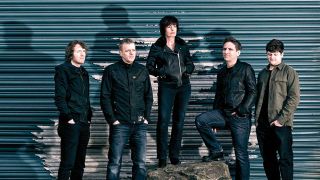 Magenta have announced they'll release a new version of their 2006 album Home on July 1. This single CD version will be restricted to a very limited run of 500 copies.

“During the preparation for the Magenta 20th Anniversary show in Newbury, we decided to include a large selection from our Home album was has always been under-performed," Rob reed tells Prog. "Having to recreate the tracks, meant having to re visit the multi tracks which were in a bit of a mess.

"Not being able to resist a tinker with the songs, I ended up re-working the multi-track. I solved some problems in the arrangements, and added fresh dynamics and colours. I kept what was good about the original - the vocals which are amazing, for instance - but re-working the backing tracks. We added some new things, and then took away anything that did not earn its keep from the original mixes. We were also very lucky to have Pete Jones (Tiger Moth Tales) on hand to play saxophone on the track Moving On, like he did in Newbury. The result I think is a more dynamic and atmospheric interpretation of what we looking to achieve."

The new Home 2019 tracklisting is: