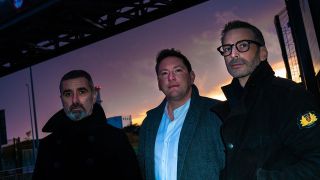 "We thought it would be fun to have a trailer for the album that would appear to be a trailer for a film, featuring actors and locations," Casey tells Prog. "Not the easiest when the story is set 200 years from now!

“I wanted the Origins album to be a cohesive, cinematic piece; a story that was as developed and plot-driven as a movie or novel, with strong, immediate music. So you can rock out to it, chill out with it, or follow the story closely, it’s all there."

Joining Casey in the band are drummer Mark Grist and guitarist Colin Sullivan. Origins also features guest appearances from Anto Drennan who's worked with both Genesis and Mike + The Mechanics and Conor McGouran from Xerath.

Origins can be ordered here. You can hear a track from Origins on the free CD with the next issue of Prog, on sale March 5.