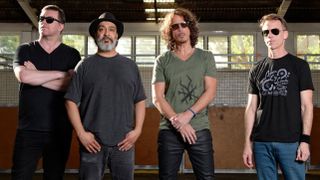 Soundgarden have released a remixed version of their track Flower.

It features on the band’s upcoming Ultramega OK deluxe edition, which will launch on March 10 via Sub Pop.

Originally released by SST Records in the US in 1988, Ultramega OK was Chris Cornell, Kim Thayil, Hiro Yamamoto and Matt Cameron’s debut album. Flower was the first track on the record, which also featured a cover of Howlin’ Wolf’s Smokestack Lightning.

The expanded edition of the record was remixed by Seattle producer Jack Endino, with Thayil reporting in 2014 that they were looking for a label to release the new version.

He said: “Last year, Jack Endino and I spent a number of weeks remixing Ultramega OK and we’re gonna search for a label and put it out with a beautiful, heavier, warmer mix from Jack, which is something we always felt we had to correct about that release.”

Last year, Soundgarden issued a box set of their 1991 album Badmotorfinger to celebrate its 25th anniversary. The band are working on the follow-up to 2012’s King Animal and it’s expected to arrive later in 2017.

Soundgarden have a run of live dates scheduled throughout April and May.

Next Soundgarden album has ‘colour where you want it to shine’