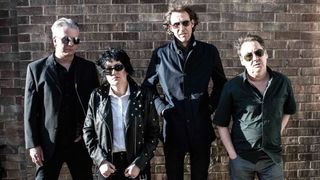 They’ve streamed their take on the 1976 song as part of a pre-order Pledge Music campaign for two 7-inch single releases to mark the band’s 40th anniversary.

The band say: “We have recorded three songs written in early 1977 that didn’t make it on to Moving Targets. In The Future, Race Against Time and Duty Free Technology will be released on one 7-inch record on purple vinyl, signed and limited to 500 copies.

“During the Resolution album recording sessions in 2015, with John Maher on drums, we recorded two cover versions. Shake Some Action and the Buzzcocks’ I Don’t Mind.

“Both tracks have been recently mixed at Polestar and are available on 7-inch gold vinyl, signed and limited to 500 copies.”

In addition to the Pledge Music campaign, Penetration have announced a 40th anniversary UK tour which will take place throughout October and November.

County Durham’s punk crew Penetration are back, 36 years on