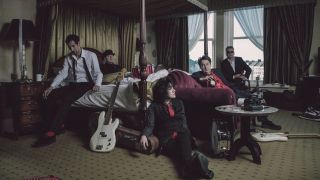 Following an implausibly extensive hiatus of 36 years, Penetration – one of the punk era’s most original, accomplished, broadly visioned yet inexplicably overlooked bands – are finally primed to release their third album, Resolution.

Lead vocalist Pauline Murray, still possessed of a voice so powerful in its bell-like clarity as to harbour the potential to shatter distant spectacles, ponders such career highs as school assembly acoustic folk, discovering Patti Smith and being bullied back into the recording studio by a remorseless Pledge campaign.

Had you harboured hopes of a singing career prior to the arrival of punk?

At school three of us girls did a folk thing where we played acoustic guitars and sang, but that’s the only time I’d ever sung in public, so I didn’t have thoughts of making a career out of singing. I had been going to see loads of bands, always right at the front, one step away from the stage, but it was the punk thing that made people get up and have a go. I didn’t even know whether I could sing or not, it was more about just getting up and doing it.

How did Penetration find one another?

We were eighteen when we started. I met Gary Chaplin, our original guitarist, on the coach to a Roxy Music gig and he asked me if I would sing for his band. When the original rhythm section disappeared we got Gary Smallman [drums] and Robert Blamire [bass]. We’re all from the same village and there was a general chemistry between us that just worked. We were into The Doors, Bowie and the glam rock thing, so that kind of musical sophistication started to come through in our songwriting.

How important was Patti Smith as a role model?

Musically she was very different from other women I’d heard, both with her poetry and the way she presented herself. What appealed to me was the fact that you didn’t have to present yourself as a sex symbol, that you could do your own thing, because her thing was very different to anything else I’d heard at the time.

From the outside, everything seemed to happen for Penetration relatively quickly.

It wasn’t as quick as it might have looked. We formed the band slightly before seeing the Pistols, we were doing covers of Jonathan Richman and New York Dolls stuff. There were no other punk bands in the North East at the time. Gary Chaplin and I went down to London, to Sex in the Kings Road, and the Pistols asked us about getting gigs in the North East. It was quite a small scene then, so word got around and soon after we supported The Stranglers, played The Roxy, did some rough demoes and Virgin signed us for a one-off single [Don’t Dictate] in November ’77. We were very, very active in the early days. We got ourselves out there, played Manchester a lot, then Gary left. So we replaced him with a fan [Neale Floyd] and just carried on touring because we believed in what punk was. It seemed to take ages before we got a deal with Virgin to do the album.

Let’s talk about Moving Targets, a staggering album and as credible a road map to post-punk as Real Life, Chairs Missing, Metal Box, Cut, The Scream and Marquee Moon.

We did a bit more writing with Neale and then we got Fred [Purser] in, who was a very proficient musician and not a punk guitarist as such. We also used Mike Howlett and Mick Glossop to produce who split the guitar parts, gave the album depth. Most of the songs had been tried and tested on many live shows so we knew how to get the best out of them. If our first album had come out a year before it would have been a very different album. Moving Targets captured the band at just the right point in our development and that’s possibly why it stands.

*Moving Targets*’ material was a lot more rock-friendly than the work of the majority of your contemporaries.

I think that goes back to the fact that before punk I was listening to really great music. I wasn’t a punk singer, bawling out one note, I’ve always liked to move about with the melody. Our drummer was into stuff like Yes, so he was always trying to do better fills. Then Fred took us even further into the rock thing. That’s just the direction it went really. We didn’t analyse anything, we just did whatever felt right at the time.

Penetration split after touring the second Coming Up For Air album in 1979. The following year you made the Pauline Murray And The Invisible Girls album with Martin Hannett producing. Then what?

After the Invisible Girls album we toured Britain with John Cooper Clarke. Then we went to Europe with it, and while there we lost our record deal. I left my husband, so that was a big personal issue, and never went back. I got together with Rob, romantically, and we moved to Liverpool. We’d been there a week and the riots broke out right in front of our house. I went into the studio to do some demos, because we’d lost our deal, and just thought, ‘I’ve had enough of this, this is just horrible.’ I got halfway through a song, stopped singing and said, ‘That’s it, I’m out of this,’ and turned my back on it all basically. I’d always had a pipe dream of opening rehearsal studios, so back in Newcastle, and I found a building, got a lease, and set up the business. So for the last twenty-five years I’ve put all my energy into running rehearsal studios for bands. I’ve had a couple of children and another life basically, outside of music, which I have no regrets about. I’ve had the life that I want.

How did Penetration come to re-form?

Neale approached me in 2002 to reform the band, but I just thought, this isn’t going to work. I couldn’t imagine that I’d be able to sing all those old songs. You just move on, don’t you? But it never goes away, you always get people going, ‘Oh, Penetration…’ It haunted you all the time, so I thought, I’ll take a look at this. If I like it I’ll do it, if I don’t I won’t. We did one rehearsal with the five members and Fred said he couldn’t do it, and Neale was living in London. Me, Rob and Gary started rehearsing and Neale wasn’t coming up, so we got Paul Harvey to do his part, and we signed another local lad, Steve Wallace, to do the Fred parts. Eventually we had a full live set together with the old stuff, so we just started to do odd gigs and we’ve been doing live shows sporadically since then.

This third Penetration album, Resolution, has been a long time coming. You’ve been reformed for over a decade.

Well, I didn’t have any desire to do another album to be honest with you. We did a couple of singles on Damaged Goods, but doing an album’s a much bigger commitment. Then at the end of last year Rob said, ‘I think we should do an album, because it’s getting really boring just doing these old songs.’ So I reluctantly agreed to do it, then he launched the Pledge campaign and that was it, there was no way out. So, I had to do an album, but it took the Pledge campaign to make us do it. Otherwise, I don’t think we would have got round to it.