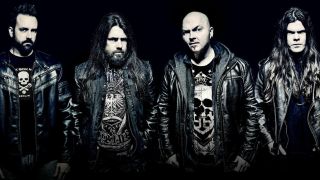 Meshiaak have released a stream of their track Chronicles Of The Dead exclusively with TeamRock.

The song features on the supergroup’s upcoming debut album Alliance Of Thieves, which will be out on August 19 via Mascot Records.

Tomb says making the album has given him a “a sense of satisfaction” that he’s not experienced before in his previous work, and adds: “All of the music and songs on this album basically span the last three years of my life. Some of them demonstrate a little more in depth than others.

“It really is a very personal album for me and somewhat therapeutic. To say that music has saved my life is a total understatement. I wore my heart on my sleeve in some of these tracks and I couldn’t be happier with the outcome. Writing and tracking this album really gave me strength and purpose at the times I needed it most.”

They previously released a video for Drowning, Fading, Falling.