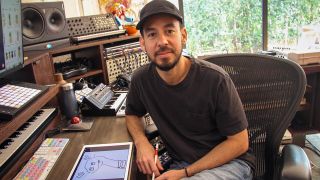 Mike Shinoda might just have released his new solo album Dropped Frames Vol. 1, but he’s checked in to say that Vol. 2 is complete and the third instalment is “in progress.”

The Linkin Park musician began creating the album series on streaming service Twitch with the help of fans, who directly participated in the project, with Dropped Frames Vol. 1, launching on Friday last week.

Speaking with Forbes, Shinoda said: “Dropped Frames is going to be the first of at least three. I've got the second one done and the third one is in progress. And I say in progress – basically it's just tightening up and mixing stuff that I made on the stream.

“Certainly it's a thing I wouldn't have done unless I was in this situation that I'm in right now. It's also funny because it's clearly not for everybody. Instrumental music is not your way to the Billboard top five!

“But anybody who knows my discography knows I've done instrumentals often, on every record, every couple of records there are instrumental tracks. A few different instrumental pieces that have gone to film and TV as well."

He added: “I feel like there is a poetry to the instrumental that it leaves an openness to interpretation in terms of the content that is a lot of fun. And I haven't ever done that before on a full-length album.”

While Shinoda wouldn’t give a firm date when fans can expect the next Dropped Frames record, he said: “I’m trying to get them out a month apart from each other.”

In March this year, Linkin Park reported they would be celebrating the 20th anniversary of their debut album Hybrid Theory later this year, and called on fans to help them mark the milestone by asking for everything from ticket stubs to video and pictures of the group.

Last week, Linkin Park’s official video for In The End passed one billion views on YouTube. It’s the second time the band have reached the milestone, with 2003’s Numb previously passing the figure.