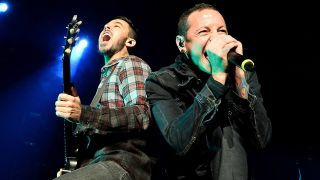 Linkin Park’s Mike Shinoda says there’s “absolutely no way” that he would take part in a Chester Bennington hologram tour.

Bennington died in July this year at the age of 41, and during a recent live Instagram Q&A session, Shinoda was asked if he would consider heading out on a tour similar to the current Dio Returns shows.

“I’ve actually heard other people outside the band suggest that, and there’s absolutely no way. I cannot fuck with that.”

He later added: “I can’t do a hologram Chester you guys, that would be the worst. For any of you who have lost a loved one, best friend, family member, can you imagine having a hologram of them? Awful. I can’t do it.

“I don’t know what we’re going to do, but we’ll figure it out eventually.”

Shinoda has also revealed that he’s been working on a new song titled Looking For An Answer which he began writing following Bennington’s death.

He performed an early version of the track at the Chester Bennington tribute show at the Hollywood Bowl in October.

Shinoda said on Twitter: “The song is at step one. Who knows how many steps come next. But I promised to share the progress. Happy holidays.”