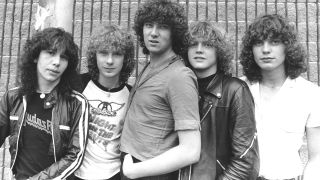 Def Leppard are preparing to release a live album which was recorded in Oxford in 1980 during the band’s tour in support of their debut album On Through The Night.

Frontman Joe Elliott was speaking with SiriusXM’s Volume show when he revealed the news, saying that the show featuring himself, drummer Rick Allen, bassist Rick Savage and guitarists Pete Willis and Steve Clarke, is a “warts an all” performance.

Elliott says: “We thought about this about a year and a half ago and there’s going to be a celebratory release. I don’t know how much of this I can say right now – I might be breaking protocol.

“But I will say this much – there’s a companion piece to On Through The Night, there’s a brand new, just mixed live performance from the Oxford Theatre in 1980.

“It’s never been heard and it’s warts and all. The band, as I say in the liner notes, when you peer through the curtain of uncertainty that my voice was back in those days, there’s a fantastic band on stage.

“The two-arm Rick Allen with Rick Savage was some rhythm section to come, considering he was 16 years old and Sav was 17, maybe 18. Pete Willis and Steve Clarke were 17 and 18.

Last month, Def Leppard wrapped up their 12-show Las Vegas residency, with Elliott saying he’d like to do something similar in the future.

The last two shows on the run at Zappos Theater at Planet Hollywood Resort & Casino were filmed for a home release, with details to follow.

Elliott’s side-project Down ’N’ Outz have just released their new album This Is How We Roll. He’s joined in the lineup by Quireboys' Paul Guerin, Guy Griffin and Keith Weir, plus Share Ross and Phil Martin.

.@DefLeppards Joe Elliott gives us the scoop on the band's never-before-heard release of a 1980 live show in London. 😱 Hear the full @siriusxmvolume interview On Demand. pic.twitter.com/dGYMQ4yNelOctober 16, 2019