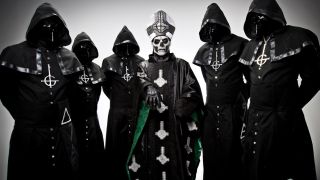 Ghost have issued a stream of their track Cirice.

It’s lifted from third album Meliora which is set for release on August 21 via Spinefarm Records. It was produced by Swedish musician Klas Ahlund.

Last week the band exclusively revealed the artwork for the follow-up to 2013’s Infestissumam via Metal Hammer.

In April, the secretive band hinted that Meliora wold feature Papa Emeritus III on vocals. He’s said to be the three-month younger brother of predecessor Emeritus II – although it’s thought they’ll still be led by their co-founding frontman.

They’ll head out on tour later this week and will play the Reading and Leeds festivals on August 29 and 30.