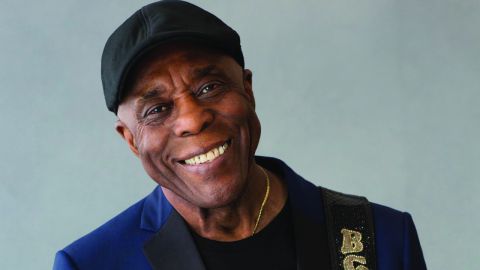 For many, 2013’s Tom Hambridge-produced Rhythm & Blues was a high point in Buddy Guy’s recent career.

But its follow-up, Born To Play Guitar, again produced with Hambridge, is even better. The title’s a dead giveaway; the emphasis is on Guy’s guitar playing, and with songs dedicated to Muddy Waters and BB King, it’s clear his mission is to safeguard the blues. He says as much – ‘I was born to play this guitar, I got the blues running through my veins,’ he sings on the title track, an excellent slow blues and his statement of intent.

High points on Born To Play Guitar are many: Come Back Muddy, a heartfelt acoustic guitar and piano blues eulogy to his much-missed former mentor, has Guy reminiscing fondly about ‘the good old times when me and Muddy was playing blues and drinking wine’, concluding that ‘Lord knows you can’t be replaced’. Flesh & Bone, meanwhile, pays loving tribute to king of the blues BB King, who having sadly passed away in May this year, leaves Guy as a lonely voice from the 50s blues scene. With guest Van Morrison delivering lines like ‘when you go your spirit lives on’ over swells of organ, female background harmonies and Guy’s superb country-tinged slide guitar, it’s a stirring moment, the musical mix reminiscent of Guy devotees the Stones’ Exile On Main St.

Guy’s previous albums have sometimes been top-heavy with guest appearances. Here they are used more sparingly and for the most part sagely – The Fabulous Thunderbirds’ Kim Wilson plays a mean harmonica on a red-hot rocking blues take of Little Walter’s Too Late and the exuberant Kiss Me Quick, Wilson’s spirited wailing shining brightly on the latter, while the irrepressible Guy sounds like he is really enjoying himself with the performance. The growling blues-rock chug of Wear You Out, meanwhile, features ZZ Top’s Billy Gibbons trading guitar licks with Guy and the missive ‘I ain’t slowing down till I wear you out’.

Elsewhere, though, Joss Stone joins Guy to cover Brook Benton and Dinah Washington’s 1960 R&B hit, Baby (You’ve Got What It Takes); it’s a fun romp but Stone is clearly no Washington and it is inevitably no match for the original.

If there is a further quibble, it’s with the lyrics on songs such as the slide guitar blues Back Up Mama and the funky Whiskey, Beer & Wine which veer perilously close to cliché, but Guy’s playing is entertaining throughout, the searing guitar solo on the former particularly effective.

The superb social commentary present on Crazy World, though, shows a much deeper, more reflective side to Guy. The song has an eerie, uneasy feel, and features psychedelic guitar and the heavy use of wah-wah and such hard-hitting lyrics as ‘People killing each other in the name of the Lord, nobody wants to stop a money-making war’.

On Turn Me Wild he is in more familiar territory: ‘You can’t pick how people remember you, you just hope someday they do’ he sings. But Buddy Guy needn’t worry about that. His place in blues history as a true great is assured.