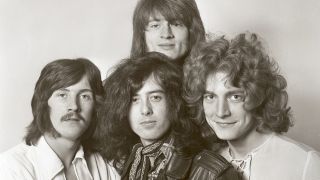 This year has seen a marked increase in Led Zep-related releases, which started with a reissue of How The West Was Won which was quickly followed by a 7-inch yellow vinyl featuring the Sunset Sound Mix of Rock And Roll and the Olympic Studio Mix of Friends for Record Store Day.

Earlier this month, the 1976 album The Song Remains The Same was reissued, while an official 50th anniversary photo book will be released in October by Real Art Press.

Today, a 30-track collection titled Led Zeppelin x Led Zeppelin has launched, along with An Intro to Led Zeppelin and digital versions of the Record Store Day vinyl release.

“To celebrate this historic golden anniversary, the band have unveiled three new digital-only releases today on all digital download and streaming platforms.”

Led Zeppelin are the cover stars of the new issue of Classic Rock magazine, where we take a look back at their greatest tracks and the stories behind them.

Other artists in this month’s edition include Billy Gibbons, The Struts, Wilko Johnson, Mudhoney, Nazareth and Joe Bonamassa.

Led Zeppelin update:  The US Ninth Circuit Court of Appeals today cleared the way for one of the most important music business trials of recent years, the famous Stairway To Heaven story, to return to court. Read the full story.