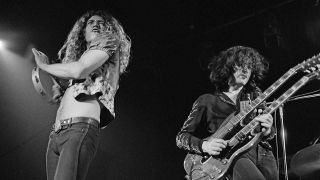 The US Ninth Circuit Court of Appeals today cleared the way for one of the most important music business trials of recent years, the famous Stairway To Heaven trial, to return to court.

Led Zeppelin were originally accused of having copied Spirit’s Taurus, which was released three years before 1971 anthem Stairway To Heaven. The case centred on the descending chord sequence at the beginning of the Led Zep song.

Now, the Court Of Appeals has found that the jury at the original trial were instructed improperly on a number of issues, clearing the way for a second trial. The plaintiff in the case is Michael Skidmore, the trustee for the estate of Spirit songwriter Randy Wolfe – better known as Randy California – who died in 1997.

The full judgement reads, "The panel vacated in part the district court’s judgment after a jury trial in favor of the defendants and remanded for a new trial in a copyright infringement suit alleging that Led Zeppelin copied “Stairway to Heaven” from the song “Taurus,” written by Spirit band member Randy Wolfe.

"The jury found that plaintiff Michael Skidmore owned the copyright to “Taurus,” that defendants had access to “Taurus,” and that the two songs were not substantially similar under the extrinsic test.

"The panel further held that the scope of copyright protection for an unpublished musical work under the Copyright Act of 1909 is defined by the deposit copy because copyright protection under the 1909 Act did not attach until either publication or registration. Therefore, the district court correctly ruled that sound recordings of “Taurus” as performed by Spirit could not be used to prove substantial similarity.

"In light of its disposition, the panel vacated the district court’s denial of defendants’ motions for attorneys’ fees and costs and remanded those issues as well."

At the original trial, held in June 2016, the jury decided that Zeppelin did not plaigiarse Taurus, ruling that it was not “intrinsically similar” to Stairway To Heaven’s opening. Page and Plant were cleared of the charge of plaigarism.

At the time, Robert Plant and Jimmy Page issued a joint statement: “We are grateful for the jury’s conscientious service and pleased that it has ruled in our favour, putting to rest questions about the origins of Stairway To Heaven and confirming what we have known for 45 years.”