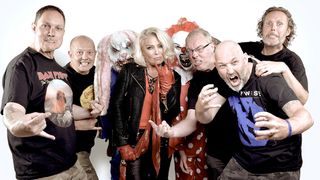 Wilde joined Lawnmower Deth onstage at Download 2016 – and says that a collaboration was “bound to happen” as a result of that performance, which she calls “a personal highlight of my career.”

Lawnmower Deth covered Wilde’s 1981 hit Kids In America back in 1991, which Wilde has previously said was her favourite version of the song.

Wilde adds: “Lawnmower Deth came up with the idea of us collaborating on a Christmas tune and I said yes immediately, feeling our worlds had become inextricably linked”.

Lawnmower Deth vocalist Pete Lee’s reports that the single is “the greatest project we’ve been involved in” and adds: “Working on a Christmas single together, some would say it’s the most bizarre juxtaposition since KLF and Extreme Noise Terror at the Brit Awards. I prefer a bunch of loveable chancers married with pure pop royalty.”

Wilde and comedian Mel Smith teamed up for a cover of Brenda Lee’s Rockin’ Around The Christmas Tree for Comic Relief in 1987 – and bookmakers in the UK believe that F U Kristmas has a chance of hitting the top spot this festive season – although they admit they were “duped” into believing that Wilde would re-release the same track this winter.

William Hill spokesman Rupert Adams says: “We took a few calls at the beginning of the week and offered 50⁄1 on the assumption that it was Rockin’ Around The Christmas Tree.

“It now appears we’ve been duped and we are facing the prospect of a significant payout on a new, contemporary and extraordinary Christmas cracker.”

View the F U Kristmas cover art below.