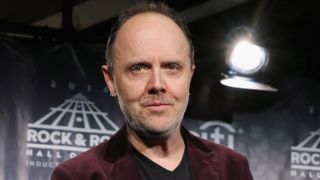 The Metallica drummer has backed the independent film financially and even makes an appearance in the movie. After a successful tour of the film festival circuit, Ulrich wants to get the film a wider release.

Directed by Babak Jalali, Radio Dreams tells the story of Afghanistan-based metal band Kabul Dreams, who want nothing more than to meet their heroes in Metallica.

They recruit the help of an Iranian radio station based in Metallica’s home city of San Francisco, and one of the radio station’s employees is determined to bring the two bands together.

Film fanatic Ulrich was approached by the filmmakers and he says he was instantly drawn to the storyline.

He tells the So What podcast: “It sounded really cool and really unique. This was a passion project and this particular group of people and the story was worthy of supporting.

“They shot here in San Francisco about a year-and-a-half ago. They’re great people, it’s a great story. I love the idea of supporting film and culture from parts of the world that don’t get a equal footing on the world stage.”

Kabul Dreams exist not only in the film, but are an actual Afghanistan-based rock band, described by Ulrich as “great.”

He says: “Kabul Dreams are a great band, a great bunch of guys. Passionate and lovely people. The film was something that I was proud to be behind. Metallica is written into the story and I make an appearance.

“It’s a great project to be involved in and be behind. It has played at a few film festivals now and got a great response. I’m going to try help the film get into some more festivals and try to give it the limelight that it deserves.”

Radio Dreams won the 2016 Tiger Award at the International Film Festival Rotterdam and Jalali was named Best Director at the Tarkovsky Fest in Russia.

Metallica are currently working on their 10th album.

Metallica album is ‘exactly what it’s supposed to be’