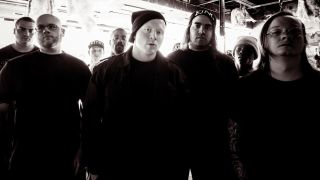 David Gunn has stated that King 810 put themselves at odds with their record label, management and agents when they decided to cancel a show because the venue wouldn’t let them carry guns inside.

Two of the band’s four December shows failed to take place as a result of their stance on firearms, with the frontman having said he won’t compromise on carrying because he’s been shot in the past.

Now he’s offered more detail on why King 810 felt they had to cancel their Detroit appearance at the weekend, soon after a Chicago show was called off by venue owners.

Gunn says in a Facebook video: “We were in no violation of the law in any way. Michigan is an open-carry state.

“The guns we had were not props or for the stage. They were real weapons, legally licensed, for our own security and protection. Having been shot in the past this is not something we slack on or leave to chance.

“This wasn’t some kind of stubborn stunt, or gimmick. We were being singled out, profiled, and we were told that.”

After listing parts of firearm legislation that he believes have been misunderstood, Gunn says he’s sorry to have let fans down but he’s not sorry for the decision to call off the show.

“Life would have been easier if we’d tucked our tails between our legs, like most in our position would have done.

“The one thing that isn’t understood is: we’re not puppets on a string. Who we are, what we stand for is not to be compromised. It never has been.”