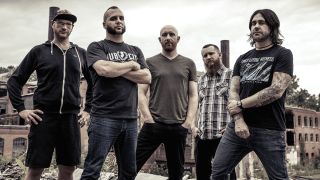 The follow-up to 2016’s Incarnate will be their third with frontman Jesse Leach since his return in 2012.

They say via Instagram: “Jam sessions starting up in October, demos are getting cranked out! 2018 we will be dropping some music and getting back on the road once again. Who’s ready for this?”

Last year bassist Mike D’Antonio said Killswitch Engage were aiming to spend more time on recording and less on touring than they had in the past.

He said: “We’re thinking that we’ve toured out butts off and it might be time for a rest.

”Maybe doing less touring and more albums might be the way to go for us. That’s our mindset right now.”

He accepted that, in the modern world, there was more money to be made on stage than in the studio – but added: “Our sanity is definitely in question right at this moment. We need to get back to a reset button.”

D’Antonio also reporting that Incarnate had marked a change of approach to writing, saying: “The only information we talked to each other about was, ‘Let’s explore – we don’t have to stay in this box. We can venture out a little bit.’”