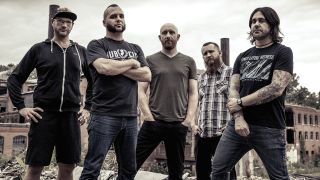 And he reports they’re aiming to start work on the follow-up to this year’s Incarnate as soon as they complete their North American tour with Anthrax in May.

D’Antonio tells the Mike James Rock Show: “We’re thinking that we’ve toured out butts off and it might be time for a rest.

“Maybe doing less touring and more albums might be the way to go for us. That’s out mindset right now.

“Having fun and being able to smile on stage is the number-one priority. Granted, you can’t make money with records these days – and we’re planning to make more of them.

“But our sanity is definitely in question right at this moment. We need to get back to a reset button.”

Despite that, he reports that feelings within the band are generally positive, especially after the fan response to Incarnate, which followed 2013’s Disarm The Descent – their first release since the return of frontman Jesse Leach.

“Disarm The Descent could have been our last record and I think it was written in that way,” D’Antonio says. “We didn’t have a vocalist when we were writing it. We weren’t sure how it was going to go.

“I think a lot of angst seeped into the stuff I wrote. Now it feels like a community again. It feels like a whole family and everyone is happy. We expelled all we needed to get rid of.”

He adds of Incarnate: “The only information we talked to each other about was, ‘Let’s explore – we don’t have to stay in this box. We can venture out a little bit.’”

Meanwhile, it’s been announced that Leach will perform a guest DJ set at the Cathouse in Glasgow, UK, on New Year’s Eve