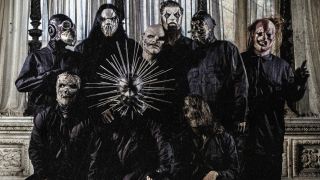 Slipknot percussionist Shawn ‘Clown’ Crahan says the band’s next album will only be a double-disc title if they have enough top-quality material to fill it.

But he’s added that he’s in no hurry to get back to work with the band, because he needs more time away following their three-year touring cycle in support of .5: The Gray Chapter.

In 2015 he discussed the possibility of Slipknot making a concept album in the style of The Beatles’ Sgt Pepper’s Lonely Hearts Club Band or Pink Floyd’s The Wall. And last month he said the band had created “about 27” pieces of music for their next release.

Now Crahan tells MetalSucks: “Right now we have a lot of material. It doesn’t mean a lot of finished material, but we have a lot because of the experience we went through last album.

“I don’t want to make something arty-farty where it has the liberty to move around, and you get all these segues and little art pieces.

“Fuck that – I want to get busy. I want to kick you in the face on Album A, nine songs, then you put on album B, nine songs, and it’s all over before you could even imagine.”

Saying that he’d like both albums to run for less than an hour each, with a potential running time of 75 minutes in total, he adds: “I’m not going to push a second album unless it’s there.”

But the next Slipknot release isn’t likely to come soon, partly because frontman Corey Taylor is busy with Stone Sour, and partly for another reason. “I need the time off,” Crahan says. “Today is the last day I would want to redo a mask or artwork.

“I toured for three years. At the end of it my father-in-law died. My front-of-house engineer passed away, who was with us for 15 years.

“The last thing I want to do is get on the road with Slipknot and try to recreate something. Corey’s written a record and he’s out supporting it. When he’s done we’ll all get back, take a deep breath and we’ll be ready.

“It’ll be business and art as usual, just the way you like it.”

1996: The masks went on, and the Slipknot phenomenon was born