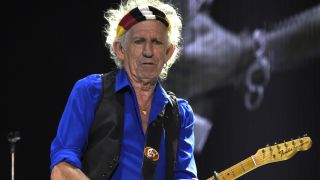 Rolling Stones’ Keith Richards says he is “as black as the ace of spades” in response to the debate around cultural appropriation in blues music.

In 1966, blues man Muddy Waters reportedly told a journalist that frontman Mick Jagger “stole” his music, but gave him his name – pointing to the revival of his singing career as the Stones spiralled to success.

But 72-year-old Richards insists “work songs” and slavery have been around since the beginning of time – and that the genre should not be defined by race.

He tells Rolling Stone: “I’m black as the ace of fucking spades, man. Ask any of the brothers.

“I didn’t know what colour these people were, as a kid. I don’t think of blues as being of any particular colour at all.

“Obviously, its history. But there were white slaves, as well. There have been plenty of work songs from way back. Try Egypt. Quite Jewish, actually. People have been doing this since history began.”

Ronnie Wood also recalls Bob Dylan’s nonchalance when he congratulated him on winning the Nobel Prize at California’s Desert Trip last month. The songwriter was called “impolite and arrogant” by a member of the Swedish Academy for refusing to acknowledge his accolade – before he officially declined to appear at the ceremony this week.

When Wood asked the singer how he felt about winning, Dylan said:“‘I don’t know,’ “How should I feel? Is it good?’

The guitarist adds: “I said to him, ‘You’re kidding. We really think it’s great and you deserve it.’ And Dylan said, ‘Do I?’”

Interview: Keith Richards and Charlie Watts on The Rolling Stones In Exile