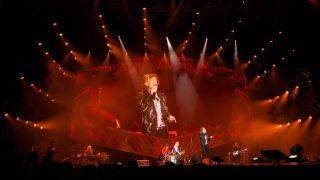 Scoring on an empty net.

Pretending like you’re paying attention when your significant other talks about work.

These are a few examples of activities only slightly more difficult than taking pops at The Desert Trip, the three-day October extravaganza convening a pantheon of rock’s mightiest living legends including the Rolling Stones, Bob Dylan, Paul McCartney, Neil Young, Roger Waters and The Who. Like Coachella, Desert Trip is going down on two consecutive weekends at the Empire Polo Club in Indio, just outside of Palm Springs, California.

After festival promoters revealed the lineup, it took the Internet somewhere between five and seven seconds to cough up a cheekier name for it — Oldchella. It’s no stretch. Among the principal musicians, the youngest is wee Ronnie Wood at a sprightly 68 years. His drummer, Charlie Watts, along with Bob Dylan, share the honour of oldest at 74 years. In fact, with the exception of Ronnie, all were born during World War II and together these men have accumulated a jaw-dropping 717 years of hard damned living. That’s like twice as much as the entire Warped Tour, plus their road crews.

Classic rock fans have already put their money where their hearts are. Five months out, the festival has sold out all tiers of passes at wallet-battering prices ranging from $299 to $1,500 and more, excluding hotel, booze, transportation, etc. Understandably, less enthusiastic observers are rolling their eyes out of their sockets and noisily grumbling about things like “age,” “relevance” and (in Bob Dylan’s case), “coherence.”

While nobody expects any of these guys to be leaping off of risers or hurling their brittle bones into the frenzied masses, the inevitable social media cracks about walkers and hearing aids feel cheap and lazy — the type of unoriginal, knuckle-dragging sop that dogs any grizzled musician who dares to continue performing after the hair’s turned silver.

In fact, most of the acts have toured extensively over the past few years, routinely delivering high-energy, two and three-hour shows. As for the arguments that “back in the day, it was never about the money, man…” while that was probably true for for the fans blowing half a week’s pay to see the Tattoo You tour, the cold reality is that for the dudes on the stage, it’s always been about the money, man, and fair play to them for that. Let’s not dress this up as some outrageous septuagenarian sell-out — these guys are still around because they’ve always tended to the business side of their craft and because they did, they’ve been able to continue making music long after so many of their contemporaries have flamed out.

Crass commercialism aside, there’s a potent undercurrent of history in the making, coloured by an ineffable sense of melancholy. The recent deaths of David Bowie, Glenn Frey, Lemmy and Prince have heralded the inexorable onset of Classic Rock’s Ice Age, as the men and women who collectively created, shaped and inspired modern music begin shuffling free of their mortal coils, one eye-watering headline at a time. Accepting that in only a few years, some of these men will likely be gone underscores the extraordinary weight of this event.

While there’s a strong sense of “I was there” cachet underfoot, Desert Trip offers more than just water cooler bragging rights because ultimately it’s not about simply seeing the men on stage — it’s about the songs and what they represent. Before the chaotic genre and sub-genre classifications, before social media pages, crowdfunding and fan-desanguinating VIP packages, guys like Pete Townshend, Neil Young and Paul McCartney were smashing rules with overt hostility to the old guard, literally inciting riots wherever they played and snorting, smoking and popping whatever powders, herbs and pills were in front of them as they wrote one mind-blowing generational anthem after another.

Equal parts visionaries and legends, these men changed the fucking world and their contributions ring loudly in every corner of modern music, from pop to metal to hip hop. To see just one of these acts revisit their songs through the long prism of time — in a place as random and unlikely as the California desert — tantalises something soulful and surreal, whether it be Paul McCartney singing Let It Be, the Stones blazing through a sleazy, hip-grinding Satisfaction, Neil Young crooning Long May You Run or Bob Dylan singing She Belongs To Me. To gather these artists for what surely will be the first and last time they’ll all play together is to celebrate the defiant, timeless spirit of youth, when a new album meant disappearing into your bedroom for a week with a gatefold LP and a pair of headphones.

Make no mistake, Desert Trip won’t be another Woodstock or Live Aid and there’s no way it will be another Altamont. The festival will be discussed, documented and eventually preserved as a Wikipedia article and some vexatious question at a pub quiz twenty years down the road. These artists have already carved their names on the walls of history and the fact that their wild, fifty-year trajectories will all intersect in this weird little desert town places the festival in a time capsule all its own.

Gripe all you want about money and age and the pitiful state of music, but when that balmy October night arrives with its warm Santa Ana winds blowing across the fairground and the sun’s slow descent sets the desert sky alight with radiant stripes of blue, red and grey, the sight of of Roger Waters singing Comfortably Numb into the the vast, star-filled sky will be, for one fleeting moment, the most special place on Planet Earth.

Opinion: Paul McCartney, the Stones & Dylan at Desert Trip? The worst idea ever