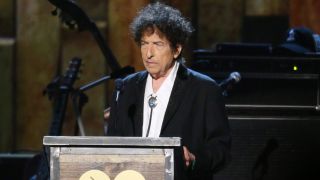 Bob Dylan has confirmed he won’t receive his Nobel Prize For Literature in person.

He’ll become the first songwriter in history to be named a recipient of the award for “having created new poetic expressions within the great American song tradition” but courted controversy in October by not responding to the Swedish Academy for two weeks after the news was announced.

Dylan previously said he would attend the ceremony in Stockholm on December 10 “if it’s at all possible.” But the Academy have now confirmed the 75-year-old won’t be there.

They say in a statement: “Yesterday evening the Swedish Academy received a personal letter from Bob Dylan, in which he explained that due to pre-existing commitments, he is unable to travel to Stockholm in December and therefore will not attend the Nobel Prize Ceremony.

“He underscored, once again, that he feels very honoured indeed, wishing that he could receive the prize in person.”

The statement continues: “That laureates decide not to come is unusual, but not exceptional. In the recent past, several laureates have, for various reasons, been unable to come to Stockholm to receive the prize, among them Doris Lessing, Harold Pinter, and Elfriede Jelinek.

“The prize still belongs to them, just as it belongs to Bob Dylan. We look forward to Bob Dylan’s Nobel Lecture, which he must give – it is the only requirement – within six months counting from December 10, 2016.”

The Academy say further information will be be issued on November 18.

Dylan is currently on his Never Ending Tour following the release of his collection of American songbook classics titled Fallen Angels. The run will wrap up on November 23 at the Broward Center For The Performing Arts in Fort Lauderdale.