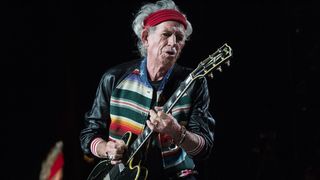 The early life of Rolling Stones icon Keith Richards is to be the subject of an upcoming BBC documentary.

The guitarist will star in the Julien Temple-directed film Keith Richards: The Origin Of The Species which will air on BBC2 in July.

The BBC report the documentary focuses on the period up until the birth of the Rolling Stones and forms the centrepiece of the network’s My Generation season, which explores the history of pop music.

Richards says in the film: “There was a feeling late 50s/early 60s that there was a change coming. Harold Macmillan actually said it – the ‘winds of change’ and all that – but he didn’t mean it in quite the same way.

“I certainly felt that for my generation, what was happening and the feeling in the air was – it’s time to push limits. The world is ours now and you can rise or fall on it.”

Temple adds: “Listening to the early Stones as a kid changed everything for me. I felt a new way of living emerging, a new kind of person becoming possible – something I wanted to be a part of.

“And without a doubt I thought Keith Richards was the Origin Of The Species. This film sets out to explore how both he and the 60s in England came about.”

The BBC also report that in September, the Stones man will “hand pick” two nights of films and live performances for the Keith Richards’ Lost Weekend. Each evening will be introduced by Richards, who’ll explain the reasons behind his choices.

Broadcast times and final dates will be revealed in due course.

The Rolling Stones released Totally Stripped earlier this month – an extended version of 1995 unplugged set Stripped, which includes three live shows and a new edition of the Stripped documentary.

They’ll take part in the Desert Trip festival in California in October, alongside Bob Dylan, Paul McCartney, Neil Young, Roger Waters and The Who.