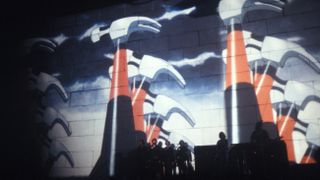 The London studio where Pink Floyd recorded their classic 1979 album The Wall will be turned into luxury flats.

The Victorian warehouse and listed church hall that housed the Britannia Row studio in the Canonbury district of Islington will be transformed into eight luxury flats after the Planning Committee at Islington Council agreed the proposals last night (June 28).

Islington Council planning chiefs fought to ensure that at least part of the building will be retained for office and studio space.

A spokesman for the council tells TeamRock: “I can confirm that the proposals were agreed last night at a meeting of the Planning Committee.”

Pink Floyd recorded the video for their track Another Brick In The Wall with pupils from the nearby Islington Green School. The Wall producer Nick Griffiths recruited the pupils and their music teacher for the iconic promo.

The studio later moved to Fulham and Floyd drummer Nick Mason converted the 25000 sq ft warehouse into offices and studio space before selling it.

Islington Council received 11 objections to the plans lodged by Britannia Row Ltd, mostly concerned with the proposed height on the extension.

Councillor Martin Klute tells the Islington Tribune: “There’s no longer a permitted development right to convert on the building, and, while the developer is adding two floors to the building for residential use, the rest of the building will be for business use. It has a lot of really nice office space.

“We have lost a huge amount of small business space because of permitted development, because developers can make much more money converting spaces into residential.

“It has done huge damage to small businesses and I’m pleased some of this building has been retained for office space.”

Floyd hero Roger Waters recently released a super deluxe box set of his The Wall package and has been signing it for fans using the names of deceased jazz heroes including Jimmy Smith and Johnny Dodds.