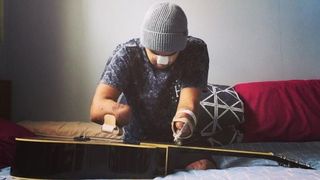 A quadruple amputee from New Zealand has learned to play the guitar after losing his limbs to meningococcal septicaemia.

Ripu Bhatia, a 22-year-old journalism student from Auckland, was diagnosed with the blood poisoning disease last July – and he feared he would never make music again.

But he was determined to get back to making music and developed a way to make it happen.

He tells Music Feeds Australia: “I first picked up a guitar when I was 13 years old and just starting high school. I was really into the 90s alternative music scene at the time, and was listening to bands like Nirvana, Pearl Jam and The Smashing Pumpkins.

“Guitar wasn’t something that came naturally to me at all. I took music as a subject at school and it didn’t take me long to realise that there wasn’t really anything special about me.

“I failed practically every assignment and my lack of confidence meant I struggled with performing.”

Bhatia continues: “But the last 12 months presented a challenge to me like none I had faced before. I was initially resigned to the fact that I wouldn’t be able to play guitar again.

“What I found particularly frustrating was the fact that I had never achieved anything of significance with music, and that I was never able to show people how far I had come.”

Determined to find a way to play his guitar, he modified his phone holder prosthetic by flipping it over so he could pluck strings, then taped a slide to the prosthetic in his left hand and used it to play notes and chords.

After spending hours practicing and perfecting his style alone in his room, Bhatia has become well-known on his university campus as a talented guitarist in his own right – and he has also started playing piano.

He adds: “When I initially developed a technique which would allow me to play guitar again, it was more about simply proving to myself that I could do it rather impressing anyone or playing well.

“The satisfaction was instant, and I was really comforted by the fact that despite my situation I was still able to do many things no matter how impossible they initially might have seemed. Over the last few years I grew more confident in my ability and would perform more regularly.

“I gravitated towards blues music, which helped me develop my own style of playing. I enjoyed creating unique arrangement to songs as well as composing music.

“Switching between acoustic and electric, I had gradually gained a name for myself amongst various social circles on campus as a good musician. I hope in the future I can achieve greater things through it.

“It has been very humbling and I’m glad that I’ve been able to help some people. At the moment, playing guitar is my main concern – and if I can generate positivity into other people’s lives while doing it, I have succeeded in what I set out to do.”

This year, The Ghost Inside drummer Andrew Tkaczyk played his kit again for the first time since losing his leg in a tour bus crash that claimed two lives.

Corey Taylor back on stage with Slipknot after neck surgery