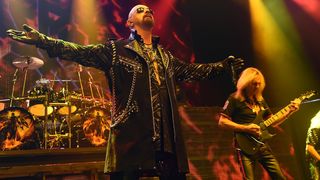 Judas Priest frontman Rob Halford has fired back at recent comments made by the band’s former guitarist KK Downing.

Downing issued a statement earlier this week saying he was “shocked and stunned” not to have been asked back into the fold after Glenn Tipton’s Parkinson’s battle came to light.

Halford tells Fox Sports 910 Radio: “With regards to everything that was made in that statement, a lot of it, to me, is completely superfluous. But the one point I would like to clarify and have on record is this insinuation that Andy Sneap was covering Glenn’s guitar parts on Firepower.

He continues: “I can categorically state that that is a thousand percent false. Because I was with Glenn for all of his guitar work – and he worked really, really hard.

“Imagine this guy in the 10th year of Parkinson’s. I’ve never seen anybody so brave in the fact that every song was a challenge for him to make it work, but he did – consistently, day after day.

“It was just a very powerful thing to experience first-hand. And this just goes to show you about the amazing stories that surround individuals around the world that are dealing with Parkinson’s in their life.”

Halford adds: “I just wanted to touch on that one issue, because out of everything that was laid out in that statement, that one hit me personally. Now I’ve been able to clarify that and make sure that everybody understands that everything that you hear from Glenn on Firepower is the amazing Glenn Tipton.”

Judas Priest will head out on tour across North America from mid-March in support of Firepower, which will launch on March 9 via Columbia Records.