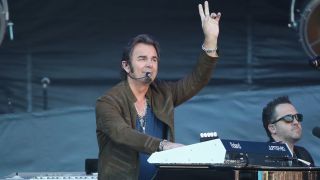 Journey keyboardist and guitarist Jonathan Cain says it’s time for the band to move on after bandmate Neal Schon slammed him for visiting the White House last year.

Schon expressed his anger in August 2017 when Cain, vocalist Arnel Pineda and bassist Ross Valory visited Donald Trump under the Journey name – with the guitarist insisting it should have been a private matter and not involve the band as they had always agreed to be politically neutral.

And after keeping silent over the issue, Cain has now spoken to Rolling Stone about the spat – and he says it’s time for all of them to put it behind them and move forward.

Cain says: “For me, it was a historical chance to go and it wasn’t political. I’m a history buff and was dying to see where all this history took place. Arnel wanted to meet the Cristeta Comerford that has worked as a chef there for 20-something years. And Neal and I weren’t on speaking terms during that time. He was bashing me, so I didn’t think he would want to come. That’s all.”

Asked how his relationship is with Schon, Cain says: “At this point, I’ll see him at rehearsals for the tour. That’s the way we always operate. I move forward. I don’t live in the Bay Area anymore. I have a life with Paula in Florida. He’s got a life with Michaele in San Rafael. We meet when we get on the road.”

He also reports that it’s “not hard” to go on the road with Schon despite the public falling out, and adds: “It’s something that you tolerate. It’s kind of like if you have a fight with your wife. You live in the same house. You have to weather it and overcome it.

“For the fans, the music is all that matters. We all have our private life and then we have Journey. You go through these things and you gotta get out the steam.

“Everybody has to vent. Then it’s like, ‘OK, you said what you said. You said how you feel. Let’s move on.’ That’s how I feel. Let’s hit reset and make great music.”

It’s been reported that Schon has claimed that Cain doesn’t want to record a new Journey album – but the keyboardist and guitarist states: “That’s not necessarily true. I think there’s timing for everything.

“I just felt like the last couple of years wasn’t the time for new music. There has to be a time where it feels right, not only for the marketplace, but for us as a band.

“It’s expensive to go into the studio. I went through a divorce. The last thing I needed was to go spend a bunch of money. I’m trying to take care of my life and get on with it. So, when the time is right, yeah. But I mean, we have enough music.

“The Rolling Stones haven’t made a new album in years. I watched them and thought, ‘Well, they don’t make new music.’ The business has changed.

Journey will head out on tour with Def Leppard across North America later this year. Find a full list of dates and how to get tickets from our dedicated tour hub.