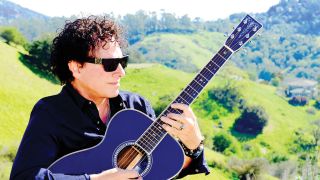 Neal Schon has expressed his anger that three of his bandmates visited the White House last month under the Journey banner.

The band’s leader and guitarist says Journey have always taken the stance that they remain neutral when it comes to politics and religion, and that Arnel Pineda, Jonathan Cain and Ross Valory’s visit to Donald Trump should have been a private matter – and not involve the Journey name.

Schon says on Facebook: “I will remain strong and consistent with the belief we’ve always shared and agreed upon – Journey should never be used and exploited by anyone, especially band members for politics or any one religion.

“I’ve been here since 1972 and this has always been our belief. This was with intent to exploit the brand and use the name.

“Journey was not there – three individual members were: Cain, Valory and Pineda whom I found. Tours are done all the time but it could have been privately.”

Schon adds: “The members who attended know my position and the way we’ve always been until now. Steve Perry myself and the rest have always agreed the music we created is for everyone.

“I had no prior knowledge of this from anyone. Not band members or management. This clearly shows no respect or unity – just divide.”

After a picture of Pineda, Cain and Valory in the Oval Office with Trump emerged, Schon comments: “So they didn’t want to make a spectacle about the visit as Journey? Press is never allowed in the Oval Office. So sorry, but this was planned and manipulated for the befit of? You figure it out.”

Schon is also quick to point out that his issue isn’t with Trump and adds on Twitter: “I don’t have a problem with Trump – it’s all politics. We’ve never allowed this. It’s not smart to mix.”

The disagreement between Schon and the trio has also thrown the future of the current lineup into doubt, with the guitarist posting the tweet: “One way or the other, I won’t be dealing with any more toxic shit. Done.”

Schon also posted a short video from earlier this year where the band are seen talking about staying neutral when it comes to politics on Hong Kong radio.