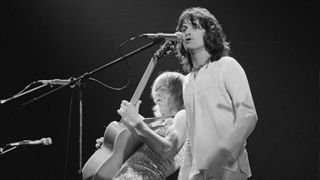 Jon Anderson is the subject of a brand new book by Yes author David Watkinson which explores the singer's early years and his time with pre-Yes band The Warriors.

Jon Anderson And The Warriors: The Road To Yes will be published by Sonicbond on December 13 and will retail for £25.

'We all know Jon Anderson as the voice of progressive rock music and Yes, but the source of his driving force is a story that has been largely untold," Watkinson tells Prog. "The excitement at finding new history, music and stories about him was the key to this mammoth project. This was an important and creative time for Jon, one which he, himself, recognises helped him to go on to create Yes music. I am happy that I finally have the opportunity to share all this knowledge and imagery with fans. I hope everyone enjoys it!"

Initially, the book will only be available only in a limited hardback edition of 250, priced £25. All copies will be numbered and signed by the author, David Watkinson, and will be made exclusively available via Burning Shed. The book is 224 pages and features over 200 photographs, most unseen for over 50 years. A paperback edition will be published in Europe on March 27th 2020, and June 26th in the USA. This later edition will be available via all normal bookselling channels and as an E-book.

To tie in with the paperback edition in March, Jon Anderson and The Warriors - The Lost Demos will be released in very limited edition on both coloured and in standard black vinyl as a picture sleeve seven inch EP. It features seven tracks from 1964 and 1967  featuring Jon alongside drummer Ian Wallace - later of King Crimson. It will be available through Burning Shed on Plane Groovy Records. Some of these tracks were mastered by at Abbey Road Studios under the supervision of Watkinson.